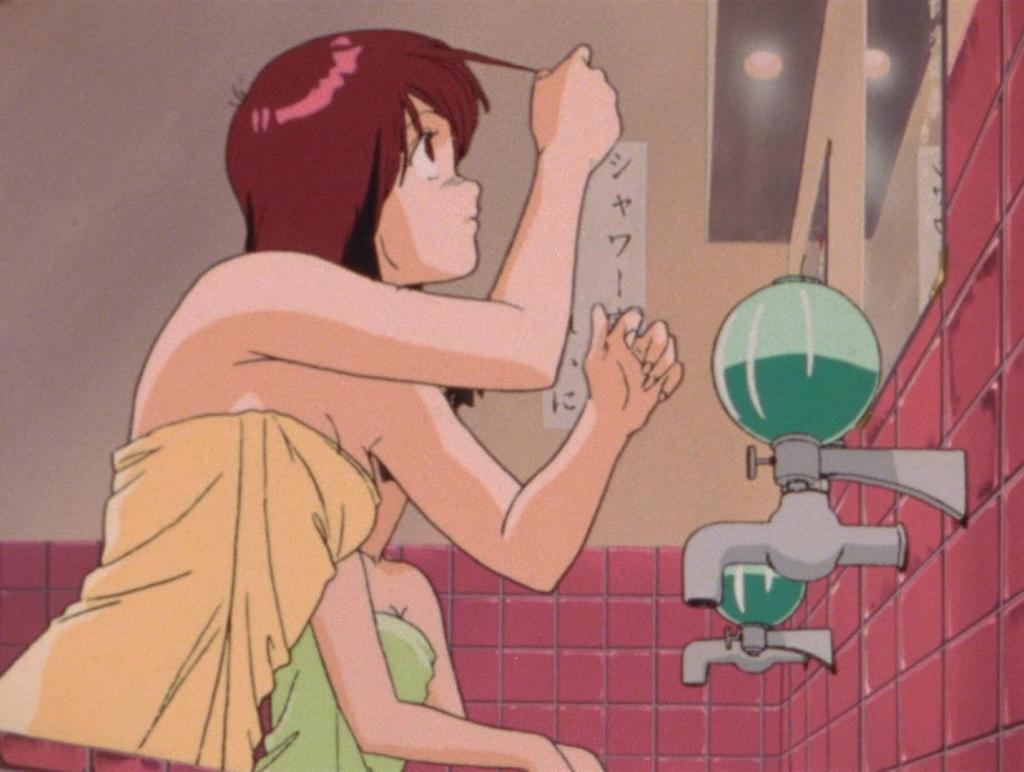 Let’s talk about what happens in the bottom left corner of this shot from Gunbuster.

As I understand it—I’m by no means an expert—overscan doesn’t play a big role in television today. Flat, digital screens mean that each pixel behaves predictably, so broadcasters can have some confidence about what viewers will see.

The majority of anime’s televisual history, however, involved analogue cathode-ray tube (CRT) screens. These often did have considerable overscan effects, possibly further enhanced by the curvature at the edge of a typical CRT screen’s surface.

The early days of English-language anime blogging have left us at least one record of experiences with overscan, from 2004.

Overscan placed demands on storyboarding and photography in both live-action and animated television.

On the one hand, anything crucial had to stay within a smaller, more central part of the shot than the whole area nominally photographed, the part which would definitely appear on even the most excisive television set.

On the other, stray materials not meant to be in shot—such as, in live-action, microphone booms—still had to stay out of the threshold zones around the edge, lest they appear on television sets which included more of the image received.

Today, we watch anime from the CRT era on digital screens with defined, predictable pixels. As a result, we get more-or-less the full image shot. That, in turn, means we sometimes see quirks obscured by overscan in original broadcasts and VHS distribution.

Thus the gap at the bottom left-hand corner in the shot above. I’d hesitate before even calling this an ‘error’, because the late-eighties animators and camera staff making Gunbuster had every reason to expect that most or all viewers wouldn’t spot it on a CRT screen.

Technological advances—welcome ones, I should add!—have accidentally made such quirks of production more visible.

Most examples of corner cutting which would probably’ve been concealed by overscan which I have spotted in anime have sat at the base of the screen. Overscan would also have partially concealed the effects of hot splicing, as I noted earlier this month, though it wouldn’t have entirely hidden splicing’s jolting effect on the whole image.

Curiously, the advent of digital colouring and photography hasn’t fully eliminated issues of this sort.

This is merely an in-between frame, and one in an otherwise very carefully- and cleanly-produced title, Gundam Unicorn. You probably need an obsessive streak to spot it. But it exhibits a similar quirk, as one of the drawings is positioned so that it doesn’t quite reach down to the bottom line.

On Twitter, @Evirus kindly shared another digitally coloured and composited example with me:

One thought on “Overscan in anime”