Design a site like this with WordPress.com
Get started
Skip to content
thaliarchus anime, notes 3 November 202015 November 2020 1 Minute 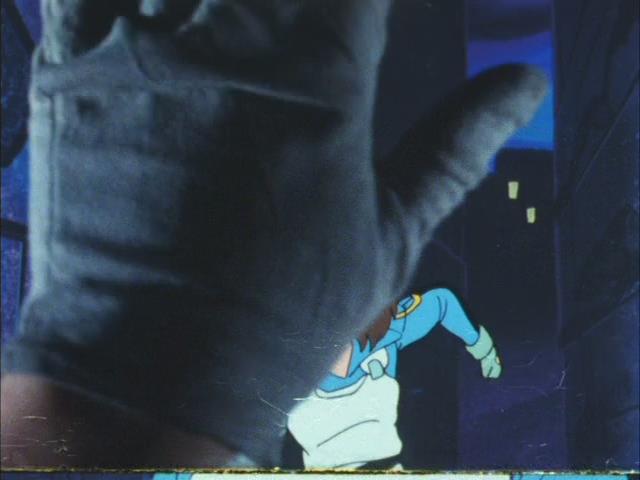 Twitter user @DogBarkingBees recently alerted us all to this moment in Psycho Armour Govarian (1983). Govarian shows every sign of hasty craft, although, in fairness, I’d rather watch it than Michael Gove, and its opening song slaps. To see it in the UK, one must trouble the Navy, but Discotek’ve released it on standard-def bluray in Region 1.

Here, for a sliver of time, the hand of (presumably?) a photography staff member becomes inadvertently a character. Or, more seriously: here, on the rushed side of eighties anime production, a lapse prompts us to remember the labour that kept other, luckier shows more pristine.

Readers might also have noticed the stretched or scratched marks and the tip of the next shot at the base of the image. These, I’d wager, were left by the process of hot splicing the 16mm film together. These come, therefore, from a later stage of production than the hand. They appear pretty often throughout the episode, and indeed generally throughout any older TV anime which haven’t had them smoothed out in digital remastering.

They lie at the picture’s edges, where (I think!) they usually would’ve been hidden by overscan: the tendency of older TVs to throw away the edges of the image, displaying most, rather than all, of what the airwaves delivered. I can say more about overscan politely veiling ‘errors’ or, more precisely, cut corners, but that topic should really get a post of its very own…

One thought on “Big hand for Govarian”